SHOULD YOU BE DIAGNOSED A „SKIER“ AND YOU ALREADY FEEL A PAIN WHEN SKIING, PLEASE READ THE FOLLOWING:

Mechanism of movement: SKKI TRIKKE skiing needs no ski boots and no binding. Winter trek shoes do. A skier freely stands up on the platforms. There is no binding, therefore no firm connection between the legs and the skis. Therefore no rotation of your leg in your knee during skiing occurs, no pulling the knee ligaments. Thank to a SKKI TRIKKE structure, the knee moves just in the direction up and down, never to the sides.
Knee bending depends on the slope steepness / the steeper the slope, the more the knee is bent. Performing a partially or completely bent knee (always an inner leg during a turn) the weight lays on the outer leg, the inner leg is relieved.
Inner leg in the turn slightly touches the SKKI TRIKKE platform by tip of the shoe controlling so the position of the foot on the platform. There is almost no SKKI TRIKKE counter-pressure against the foot. The heel is lifted. By changing the side angle of the shoe heel on the platform it is possible to eliminate or reduce the knee pain by its bending (bending angle 100 – up to 120 depending on the slope steepness or moguls size).

Outer leg is entirely stretched during a turn. The skier’s weight lays upon this leg. A skier holds handlebars and stands on the platforms that are in a straight direction, the device and the skier’s body both turn in the direction of the ride. No knee rotation is possible. Rotation is eliminated by the front and rear skis. In case of conventional downhill skis, the biggest pressure and body rotation point is concentrated in the knee – leg is one direction and the body is another one (mainly by a wrong skiing method or by an uncontrolled situation). This is technically impossible by a SKKI TRIKKE, no rotation pressure on knee and its ligaments occurs.
Falling. In case of hitting an obstacle, or falling down the SKKI TRIKKE skier, the leg is free. Therefore we prevent from any injury of your knee, as the shoes are not bound to the skis.
Risk: The only uncontrolled pressure on knee may occur in the perpendicular direction up by transferring the weight to the outer ski in case the ski hits an obstacle (e.g. piece of ice). In this situation, two forces meet in the not-yet-stretched knee – body weight and an obstacle pressure from the bottom. In case of an already-stretched knee, the pressure is transferred to the entire body. To eliminate this risk, ski more slowly when the trail surface is not even or it is icy. Partially it can be eliminated by applying softer elastomers */ - description follows.

Mechanism of movement: Skiing with the SKKI TRIKKE is different to skiing on the conventional skis or a snowboard. Main difference consists in the fact the SKKI TRIKKE skier holds the handlebars while the weight of the skier is distributed to legs and arms, back and abdomen is loaded differently. Skiing is performed by carving turns, inner leg relieved, outer leg stretched. The body is stretched, center of gravity should be as much above the front ski as possible. During the ride, the body has minimum three support points (both arms and one leg). A SKKI TRIKKE skier therefore endures to ski longer time than conventional skiers and snowboarders. He is less tired, most significantly the legs, especially knees are not overloaded in the conditions of heavy deep snow, ungroomed run or poor visibility. This is an advantage for people with lack of physical form or overweight people, or those who must not get injured.
Fitness. Skiing on the SKKI TRIKKE means that the skier is less tired and does not need to rest so often as conventional skiers or snowboarders do, therefore he can ski longer time and distances. All his body is loaded, he does not need to make breaks for rest during skiing. In case of several hours skiing, risk of injury is less likely than for conventional skiers or snowboarders.

126 km skied is a record (just downhill km counted) during an all-the-day SKKI TRIKKE skiing experience since start till the end of chairlift run hours. An evidence is given by a skier aged 50 with an average physical form who has been skiing all day down a black trail (Italy, South Tyrol, Speikboden center, downhill run of 5,5 km), having no breaks downhill, breaks just uphill in a cable car lift. A skier on the conventional skis or snowboard does the same performance only if he is in top form.
Legs are significantly less loaded by skiing with the SKKI TRIKKE. The way of skiing is carving turns. In the turn, outer leg is loaded, the body is comfortably supported by handlebars. The knee of inner leg is relieved. Three support points (two arms and minimum one leg) guarantee, that the legs become remarkably less tired than those of conventional skiers or snowboarders. Each ski is bound to the SKKI TRIKKE by special version elastomers (rubber amortizers - attenuators), that damp and catch up the first blows from the uneven slope surface. The SKKI TRIKKE producer enables to select either a more professional sportive version of the SKKI TRIKKE (harder elastomers), or a „tourist” soft (softer elastomers). Soft elastomers absorb well the unevenness of the surface while not transferring hits from the unevenness to a trikker, ride becoming comfortable and safe and the trikker’s knees being protected. SKKI TRIKKE with harder elastomers is faster, however the device transfers more unevenness to the trikker’s body.

Back: Basic position of a trikker is an erect posture. A protruded butt (a basic mistake of the beginners) reduces the ability to control the SKKI TRIKKE. Everybody learns quickly to control the position of the body on the SKKI TRIKKE and to hold an upright posture whereby a flat backbone is achieved. An upright backbone does not make any pressure to the vertebras. Elastomers of the SKKI TRIKKE absorb part of the energy caused by the uneven surface of the run. SKKI TRIKKE is fixed in the longitudinal axis. A skier’s gravity center lays between handlebar and his feet what enables to ski on top of the moguls enjoying a perfectly safe ride. Skiing with the SKKI TRIKKE makes a skier enjoying the strengthened back and abdomen muscles.
Arms and shoulders: By the fact that hands hold the handlebar, they are stressed. The beginners may experience a muscle pain in their hands. Especially those who do not do any cycling in summer time. It is a different stress and a different movement than usually performed. It is necessary to learn handling with SKKI TRIKKE (carrying and transporting).

MISTAKES BY SKIING WITH SKKI TRIKKE

Butt protruding: according to the statistics, the main reason for the problems of the beginners during the ride is their shift of the center of gravity to rear skis – they protrude the buttock, the body is not in an erect posture. SKKI TRIKKE is worse controllable in this position of a skier. Trial rides of the beginners should be performed on mild slopes achieving slow speed to prevent hitting any obstacles. Once the beginner realizes that pelvis should be forward and he controls his position, SKKI TRIKKE will become controllable and very safe.
Overturning: The beginners may overturn SKKI TRIKKE, meaning that the device turns over its axis, rear skis turning downwards and the device is moved forward by its rear part, rear skis block up causing the trikker to fall on his back. This overturn occurs when the device is not turned downwards by its front part and does not ski on the ski edges, but on flat skis. For making a turn, a trikker does not lift an inner leg to a shoe top and tries to make a turn just by turning the handlebar.

Center of gravity on rear ski. An advanced trikker passes the moguls by stretching forward his arms, bending down the head and bending the entire body backwards – exactly as the obstacles are overcome by a cyclist. This will ease the front ski and by passing the mogul, it will lift up, SKKI TRIKKE „will run away“ from under the feet and the trikker falls on his back. This mistake is eliminated by an uninterrupted holding the pelvis and the center of gravity in the front, in basic position - an erect posture.
Falling. By falling, SKKI TRIKKE typically directs away from the trikker and the trikker slides down the slope always more quickly, there is no contact of the device with the trikker. SKKI TRIKKE brakes the sliding trikker. It is therefore important for the trikker to keep a safety belt round his hand or his leg to prevent endangering other skiers on the slope by the sliding device. Consequences of falls experienced with the SKKI TRIKKE, unless hitting an obstacle is the case, are minimal as no joints are twisted, no knee ligaments are torn, no leg bones are broken as it is common with falls of conventional skiers or snowboarders. We recommend the trikkers to take helmets and back protective tool, so called turtle in order to be safe. 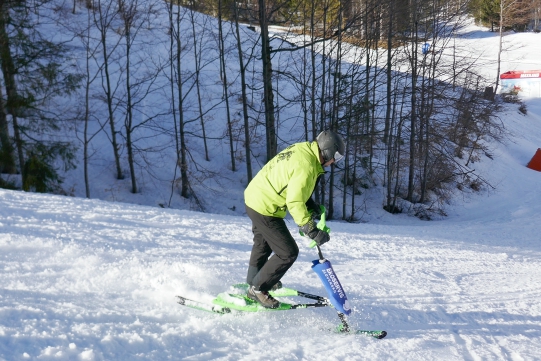 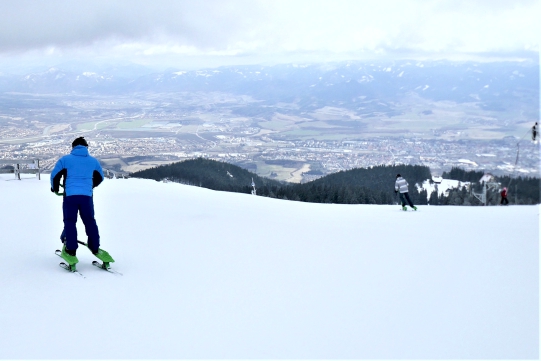 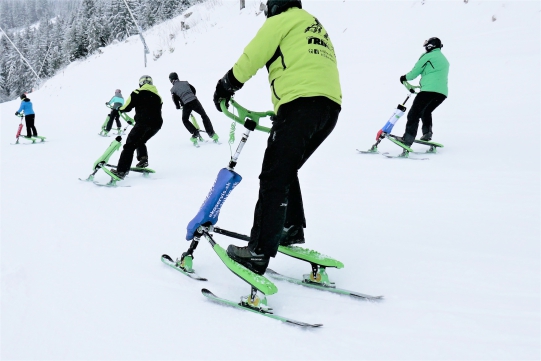 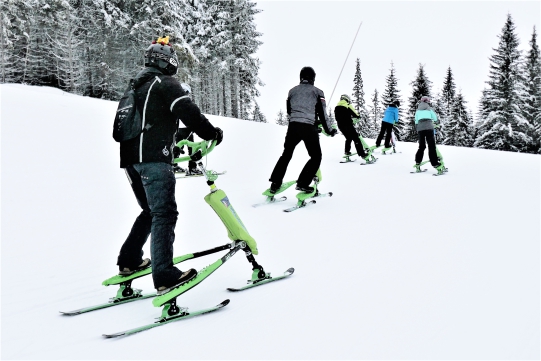 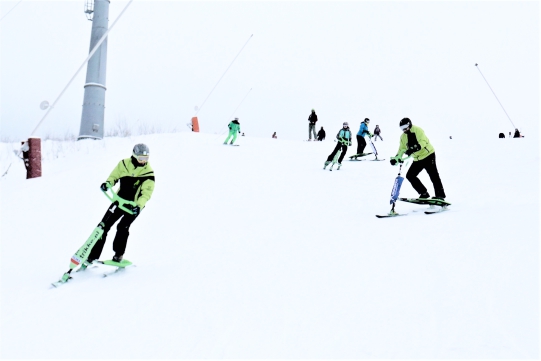 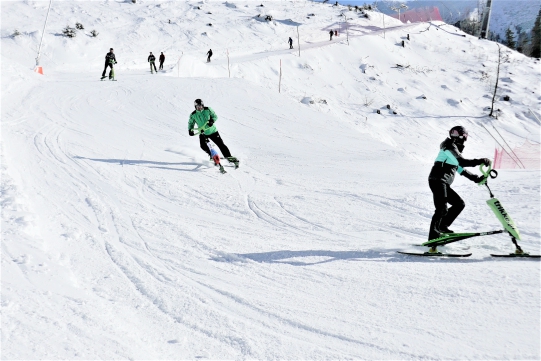 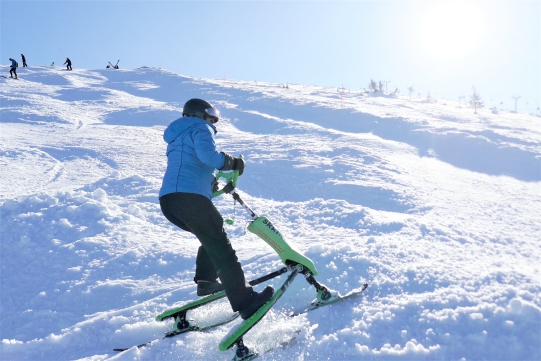 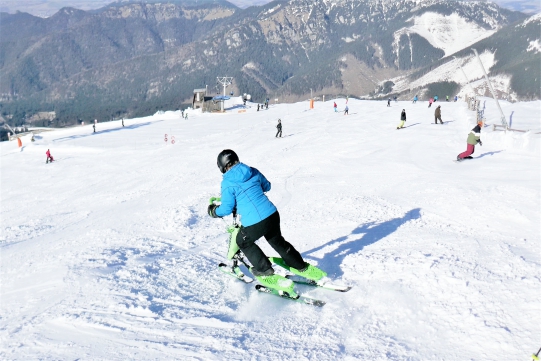