RIDING SKKI TRIKKE? FUN AND SPORTS AT THE SAME TIME

SKKI TRIKKE ride consists of carving turns – therefore it is a fun …. Why will you enjoy skiing a greater distance with your SKKI TRIKKE than the skiers and snowboarders do? In most cases you with the SKKI TRIKKE will be down at the end of a trail earlier than majority of skiers. It is not because of higher speed (they will be overpassing you), but because you will not need to make breaks for rest. You will ski down any long and steep slope at one time and without rest. This can not be achieved by majority of conventional skiers and snowboarders, especially if the trail is ungroomed. This is too difficult for most of skiers. You hold the handlebar, you put an effort on the whole body, you endure exposure longer not being tired after the ride. You may ski all along the day, skiers and snowboarders can not hold on the same performance as you do. You will get a full use of a day skipass, therefore you will save money – spending less time at the apres-ski bars.

Why is SKKI TRIKKE the most safe on a groomed trail? You have three support points on the snow – three skis plus handlebars. It is a difference to just two skis or just one snowboard ski. Three skis predetermine your safety on the slope and your capability to react on the situations on the slope. You avoid all critical situations you know from skis (bending, wrong loading on the inner ski, or wrong arms work). Compared to the skis, with SKKI TRIKKE you lose some speed, but you gain safety, you do not endanger the others. You master SKKI TRIKKE safely in any situation. SKKI TRIKKE means safety on the trail for all.

Why does SKKI TRIKKE like downhill as well as short slalom turns, steep or even slope? It is because you are able to transfer your center of gravity. You are not firmly connected to a SKKI TRIKKE, there is no binding. You just stand on the platforms, react to the slope profile controlling your speed to ski fast or slowly. By a simple move of your feet forwards or backwards, by bending your body over the front ski more or less forward, you will move your center of gravity to the position that will not allow you to lose the pace of the ride. The highest speed of the SKKI TRIKKE is by the lowest loading of the front ski. For fastest skiing the feet and the whole body is moved backwards. Do not forget that you also hold the handlebar and positioning your body is perfectly controllable. 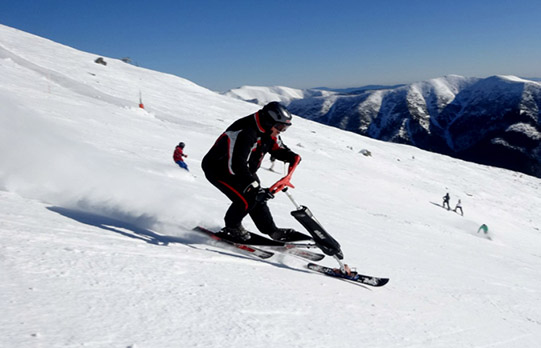 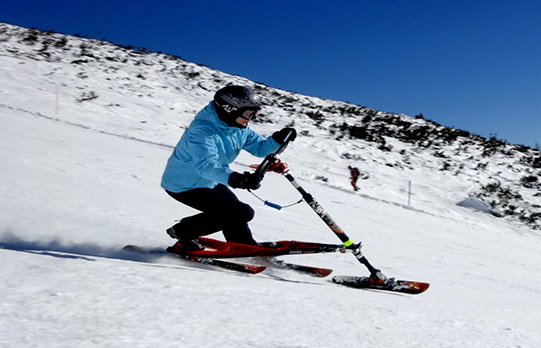 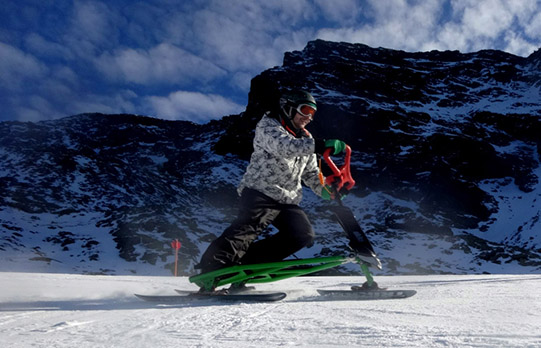 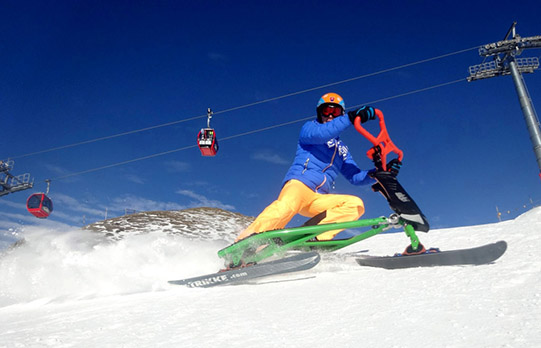 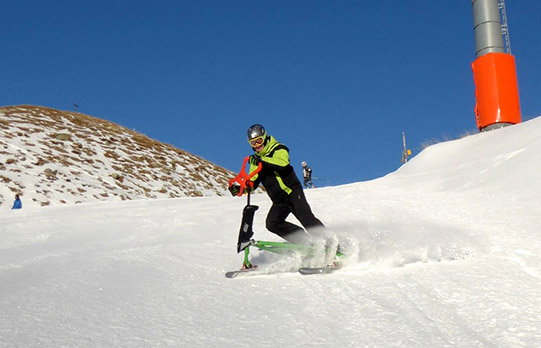 SKKI TRIKKE is safe even by extreme conditions.
By riding an extremely steep slope (e.g. Lomnické sedlo), it is necessary to make short fast turns. Therefore you have to move the center of your gravity forward by moving your feet forward by what your whole body will move forward. By moving your center of gravity forward you will turn by the front ski turning the handlebar. By that you may control the movement on the slope (review the video). In a foggy weather when you can not distinguish the terrain configuration, SKKI TRIKKE will enable to ski down by a slow safe way / you only will sense you passed a mogul or a slippery ice spot. You have three support points while holding the handlebar. Do you wish to stop? You will move the SKKI TRIKKE on the ski edges and the device will stop. By skiing in spring time with typically soft heavy snow, skiing in half-meter deep moguls or on icy slippery runs, the best way is to ski on top of the moguls. You should ski directly down, not searching a “better” terrain.

Why does SKKI TRIKKE never achieve the same speed as skis or a snowboard do?
It is a different sport. Skiing with SKKI TRIKKE is never as fast as skiing with downhill skis, as three skis provide a higher resistance against the snow. For SKKI TRIKKE, a giant slalom is deemed to be a „special slalom”. SKKI TRIKKE is longer, therefore it is not possible to turn as perfectly as by a classical slalom. 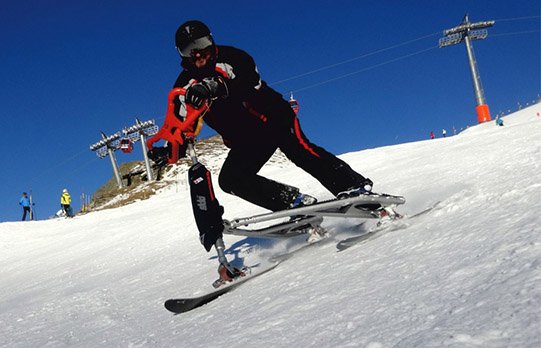 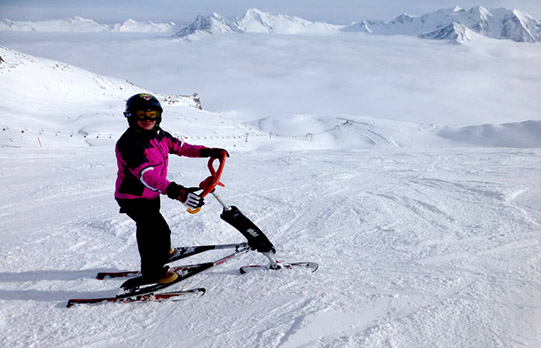 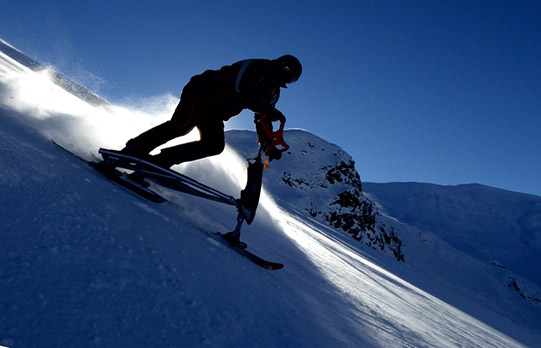 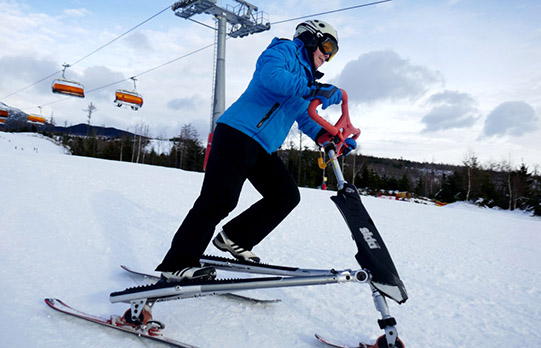 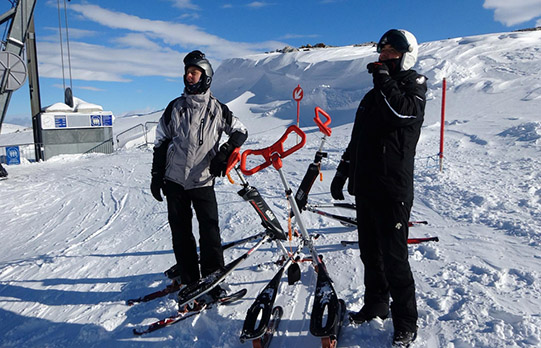 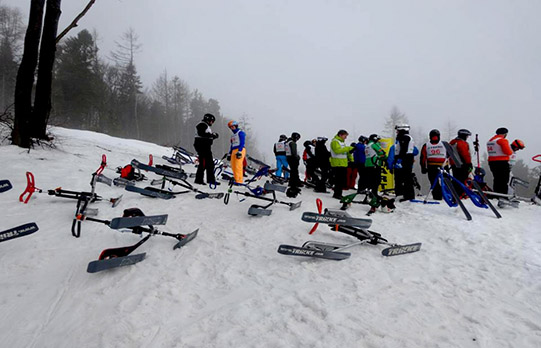 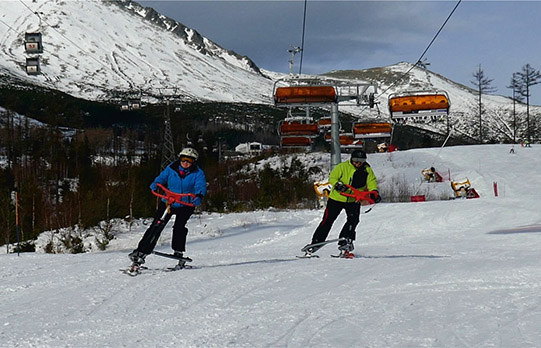 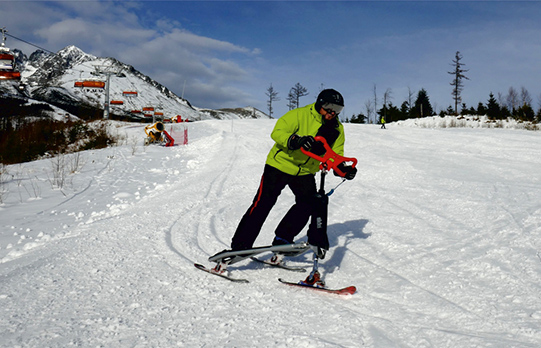 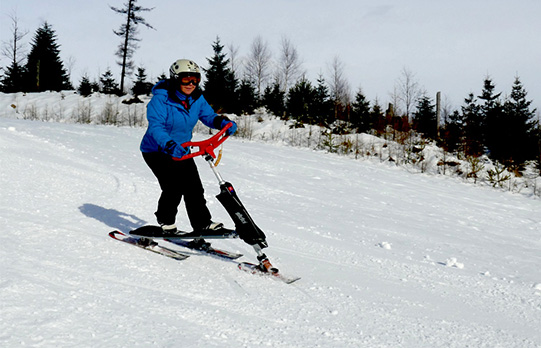